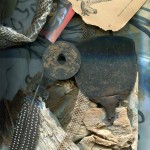 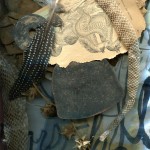 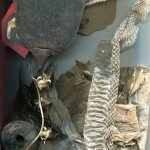 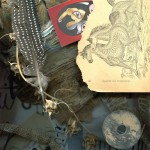 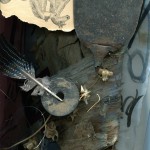 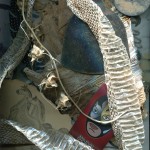 These ten digital prints were made on an Epson scanner.  I placed ten separate objects on the scanner and scanned the result.  I then removed one of the objects, rearranged the rest, and scanned again.  I continued to replace the removed object and removed a different object, and scanned the result.  I did this until I had scanned nine different images.  The final prints were printed in an edition of 10 on Moab Entrada bright white, rag, 8 1/2 x 11 paper.  The 10 prints are housed in a custom-made folder of black Arches cover paper.

I was born in Wisconsin, and grew up on the east coast, wandering the woods, collecting leaves, bones, and bugs. After earning a BA from Oberlin College, studying sculpture at the Brooklyn Museum School, and receiving an MFA in sculpture from the Rhode Island School of Design, I moved to a rural town in northern New Mexico where I live with my blacksmith husband, and a long series of dogs and cats. My work is based on the natural environment where I live, maps, scientific diagrams and microscopic images. My work is in public and private collections throughout the United States and Europe.
View all posts by Julie Wagner →
This entry was posted in Prints. Bookmark the permalink.

One Response to Ten Variations on a Theme