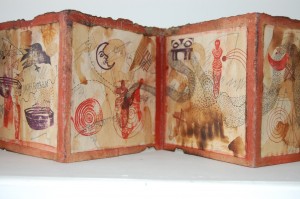 Ink and hand-carved rubber stamps on Nideggen paper, mounted on amate paper.  H. 6″  L. 48″  “Goddess Chronicles” is a book about the goddess culture and how much knowledge of it has been lost. I used a bark paper accordion to refer back to the pre-Conquest codices of Mexico, many of which were burned when the Spanish arrived. It also refers to the practice of the Aztecs, who, when they conquered another people, would burn their books and write new ones, revising history to make themselves preeminent. The images, made of hand-carved rubber stamps, are taken from many different cultures and refer to various goddesses and their attributes. The names are also of goddesses who were once well-known and venerated. The book is rubbed with red pigment, once a common practice at shrines like Catal Hayuk [Neolithic site in modern Turkey]. All the images are overlaid and sometimes erased and smudged to give a sense of time. There is an underlying progression to the images from birth through life to death to rebirth. I wanted this book to have a real sense of age and survival against all odds.”

I was born in Wisconsin, and grew up on the east coast, wandering the woods, collecting leaves, bones, and bugs. After earning a BA from Oberlin College, studying sculpture at the Brooklyn Museum School, and receiving an MFA in sculpture from the Rhode Island School of Design, I moved to a rural town in northern New Mexico where I live with my blacksmith husband, and a long series of dogs and cats. My work is based on the natural environment where I live, maps, scientific diagrams and microscopic images. My work is in public and private collections throughout the United States and Europe.
View all posts by Julie Wagner →
This entry was posted in Artists' Books and tagged amate paper, artist's books, goddess culture, hand-carved rubber stamps, images of goddess symbols, Mexican bark paper, red pigment. Bookmark the permalink.